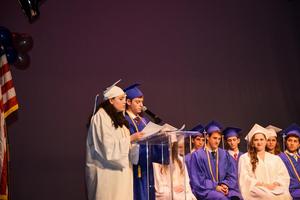 Written by Nate Linsider and Deborah Broyde, presented at their Senior Commencement Ceremony

Written by Nate Linsider and Deborah Broyde, presented at their Senior Commencement Ceremony

Good evening parents, administrators, teachers, students, fellow graduates, family, and friends. Thank you so much for coming. Well, the day has finally come for us, the class of 2018, to graduate. This is the time that we move on to the next chapter of our lives, to  Yeshiva, Seminary, College and beyond. We’d like to share with you, tonight, an idea from this week’s Parsha that strikes a chord with us as a class and how we see our High School experience.

Moshe, feeling the strain of the ever complaining people, turns to Hashem for help. Hashem tells Moshe to appoint 70 elders to help shoulder the burden of leading the people. In the course of the elders “inauguration,” two men, Eldad & Medad begin to prophesy in the camp. Word of these “rogue prophets” comes to Moshe, and Yehoshua is concerned that these men must be stopped.

Are you jealous on my behalf? Would that all the Hashem’s people were prophets, that Hashem put His spirit upon them!

Why does Moshe respond so casually? Why is he not concerned as Yehoshua was? Why was he not threatened by these “rogue prophets”? Rabbi Sacks explains, that Judaism prefers the leadership of influence to the leadership of power. “Power,” he explains, “works by division, influence by multiplication.” The more people share the special connection with Hashem that is prophecy, the more Hashem’s influence, His ideals and values, can be spread to the world.

Education is the greatest example of influence, and it may be the very reason Judaism prefers it. It is also the reason we have been able to survive as a nation for so long. Without the teachings of the Torah, we would have no moral reason to continue our way of life. Without the influence of education, we would have fallen like other nations before us.

As students, we have been steeped in education, in learning the laws, values, and lessons of the Torah, all while soaking in as much knowledge of the many disciplines of the world we live in. But, the class of 2018 has done much more than sit passively absorbing the lessons of our teachers, our leaders, we have put those lessons into practice.

If there was one description, one trait, that unites each and every member of this senior class, it would surely be leadership. The students in the class of 2018 reflect this ideal of leadership perfectly, after all, as students our leadership is not one of power but of influence. Just as our leaders led the Jewish people, the best of them through influence, so we, the class of 2018, have led AJA.

Please indulge us as we take a moment to reflect on all that we have accomplished as leaders over the course of our High School careers. The word “leader” is an interesting term because there are many types of leadership. We have identified four types of leadership reflected both in our class and in our role models throughout Tanach: the classic leader, the underdog leader,  the behind the scenes leader, and the unknown leader. Each of these leaders has their own  portfolio, their own “mission” to accomplish, and each senior sitting on this stage represents one or more of these models of leadership.

First we have the classic leaders, those who are front and center. They command attention and can control a room. Whether it’s running games at community time, like student council, or leading a team on the court or field, these are the people that have the ability to connect to each and every individual, reflecting and modeling values through their everyday lives. Moshe Rabbeinu, who led Bnei Yisrael during their infancy as a nation, is the best example for this kind of leader. While he was shy and very reluctant at the beginning, Moshe led Bnei Yisrael out of Egypt, led them for 40 years in the desert and all the way to the border of Israel. B"Y continuously sins, and Hashem, on more than one occasion gets very upset and is ready to throw in the towel.

Instead of leaving his people behind, Moshe continues to defend B"Y, holding Hashem to the promises he made to our forefathers years before.  He believed in us, and embodies what it means to be a selfless, humble, yet strong leader. Moshe, as many other leaders throughout our history,

lead Bnei Yisrael to the promised land but was unable to enter the land himself. Similarly, many students started, continued, or revolutionized initiatives during their high school experience, such as Nerd club, Meat Club, Safecracking,  Bnei Akiva, Palette and so much more. Much like how Moshe didn’t get to go into Israel, we won't get to watch our initiatives grow to their full potentials, but we get to pass them onto the next generation of students who will continue our legacy.

Next, we have the underdog leader. This is a person who nobody expects to lead, but when the opportunity presents itself they show themselves to be the leader they always believed they could be! People might be initially confused that this person is stepping up, but ultimately, everyone realizes the potential that laid dormant within this individual. While there are many in Tanach who fit this description, we think it best describes David Hamelech. David was the youngest of seven siblings. While his older brothers were warriors, he was a shepherd for his family. When Shmuel comes and asks to see Yishai’s son’s to choose a king, David was barely an afterthought!

It is David, the shepherd, without the aid of armor or fancy weaponry, who faces and defeats Goliath. It is David who ultimately becomes the King of Israel, the gold standard that all future kings are measured against. It is David who built Israel  into a powerful kingdom.

Looking at our grade, their are many underdog leaders who led us and our school like David led the kingdom of Israel. When Shabbos Dancing needs to start we have the ruach ready, when Purim Palooza /Purim Night Live needs to be more exciting we choreograph TWO dances. When people need advice, there we are to give it. Ultimately, when anything needs to get done, we are there.

Behind the scenes leaders are the people who do the work. We see their impact, but we hardly ever see them in the spotlight. Whether they are editors of publications, chagiga crew or producers, we see the product and sometimes forget about the people, and the hours they spent preparing.

Devorah the Shofet, was this kind of leader. She sat under a tree, gave judgment, and supported Barak and his army, but we never see her as a formal leader of Bnei Yisrael. In a way she lead from the shadows of her famous palm tree. Behind the scenes leaders can be easily forgotten, and it is important to remember who they are and thank them for all their hard work.

For us as students, our parents are often our example of behind the scenes leaders. They work day in and day out not only to put food on the table and a roof over our heads, but to instill in us their values, to mold and shape us into the people we are today and those we will still grow to become. They continuously support our aspirations- from academic help, to driving carpools, to our many activities- they do it all. They are there to go the extra mile.

The final type of leader, is a leader that no one ever thought could be a leader, even the individual themselves. This person can be- someone who shows you memes to make you laugh, or someone who helps you cram for an upcoming test. They do not have to be a leader in title, but people look up to them for all sorts of reasons. Rut, who we just read about during Shavuot, was just like this. There are many wonderful ways to describe Rut, but "leader" might not be the most accurate term. However, we today should look to Rut and her story as a way to learn how to act - to emulate her values and treat people properly without demanding recognition.

To our classmates, the Class of 2018, each and everyone one of you is a leader in your own way and has the potential to become an even stronger leader.As we graduate and go off to college, Israel, and inevitably the world, our blessing to you is that each and every one of you continue to cultivate your ability to lead.  We are the future leaders of the Jewish people. We will lead on our campuses and within your communities. Remember, though, the lesson of Moshe - leadership, in its highest form, is not about power, but influence.

Mazel Tov on everyone's accomplishments, you have worked hard and have definitely earned it!