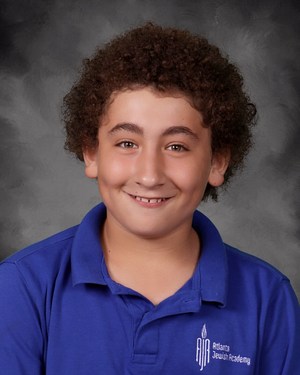 Wednesday, November, 29 2017
Written by 7th grader Jordan Steinberg who will become a Bar Mitzvah this Shabbat

This week’s parsha, Vayishlach, features our forefather Jacob, who is traveling back to the land of Canaan finally after many years of trials and tribulations. On his way, he encounters his estranged brother, Esav, from whom he stole his birthright years before. During Jacob’s travels before he meets Esav, he is alone at night camping out and he encounters a man. As it says in the text (Chap. 32, verse 25):

וַיִּוָּתֵר יַעֲקֹב, לְבַדּוֹ; וַיֵּאָבֵק אִישׁ עִמּוֹ, עַד עֲלוֹת הַשָּׁחַרAnd Jacob was left alone; and there wrestled a man with him until the breaking of the day.

Who was Jacob wrestling with? Some say it was the angel of his estranged brother, Esav. Some say that he was wrestling with himself—the Jacob who stole the birthright and ran away from his older brother and the mature Jacob, who will confront his older brother, hopefully in a peaceful reunion, but fearing that it may not be. Jacob emerges from this wrestling match triumphant, with a new name, Yisrael, meaning “May G-d prevail.” Jacob ends up maturely facing his brother with much trepidation, and they reunite without a fight.

As a Bar Mitzvah, I realize that this is a milestone in my growth as a person and a Jew. I realize I will have some struggles as I progress and advance in my life. This is natural, and expected. I will try to maturely work through these struggles myself, influenced by the knowledge and guidance of my supportive family, teachers, and friends. Sometimes I may limp away from these struggles, like Jacob did from wrestling with the angel, but that’s part of growing up. I will remember to draw from the strength of Jacob, as I navigate my path through growing up.