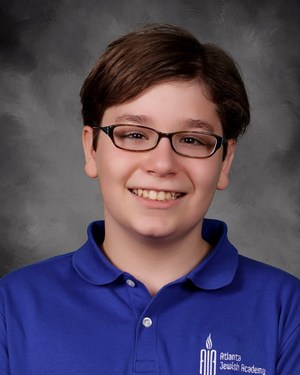 Thursday, November, 16 2017
Written by 7th grader Adam Berkowitz who will become a Bar Mitzvah this Shabbat

Yitzchak and Rivka were married for twenty long years without having children. Finally, Rivkah got pregnant with twins, but she was puzzled at the start of Toldot. She learned there were two children in her womb who would be the fathers of two nations, and the younger one would eventually rule the older one. The midrash is quoted in Rashi (25;22), and said that when Rivkah was pregnant, whenever she would go past the Yeshiva, Yaakov would kick, and whenever she went past a place of idol worship, Eisav would kick.

It is a basic concept that to be able to be punished or rewarded by HaShem, one must have free will. If your entire life has been pre-destined to the extent that you control none of your actions or thoughts, then you are not to be held responsible for the actions that you do. The question is, if Eisav was already kicking out to Avodah Zarah (idolatry) before he was born, where was his free will? The answer is, as Ramchal points out in Derech Hashem, that free will does not mean that there is a completely equal pull to do good, as there is to do bad. Rather, as long as it is not one hundred percent inevitable to pick one option, there is still free will.

This struggle is shown in my favorite movie series, Star Wars, which has a central theme that each of us has a dark side and a light side and we must fight the urge to go to the dark side.

Eisav is like Darth Vader, whom Master Yoda immediately could tell had a huge dark side - just like Eisav was inclined to be evil, even from birth. Despite this inherent urge to do evil, we see Darth Vader has the freewill to choose the light side at the end of Return of the Jedi, when he gives his own life to save Luke Skywalker from the Emperor. Eisav had a strong urge to do Avodah Zarah even in the womb, but when he grew older he had the tools to fight that urge. For instance, we see Eisav willingly choose to sell his birthright for a bowl of lentil soup. He cared more about his immediate comfort and rejected the ways of his father and grandfather.

Yaakov is like Luke Skywalker, who inherently was a Jedi that had the urge to do good but was still capable of following his inner urges to give into the dark side like when he attacks Darth Vader in anger. Yaakov also is not perfect - he also acts on his yetzer hara (evil) when he lies to Yitzchak to get the blessing of the firstborn and pretend to be Eisav.

In our daily lives, we can choose to do a good deed or we can choose to ignore the opportunity to perform mitzvot. For example, you can choose to stop and hold the door for the person behind you, or rush to your next activity and let the door slam without thought to those coming after you.

The important takeaway for me as I become a Bar Mitzvah, is to follow the words of Hashem, immortalized by Yoda from The Empire Strikes Back:  “Do or do not, there is no try.”